A Gift of Stars 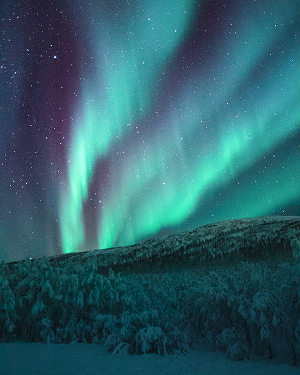 A southerly wind blew the dry needles on the yellow cedars sending an eerie moan through the forest. A shiver raced down Sanders’ spine. He spun on his heel, sword ready, knees bent, ready to lunge into combat. But there was nothing behind him except a dense forest, shadows that played tricks on his mind, and more questions.

As a boy, Lord Sanders Maksiner Persungen’s father had told him and his brother stories of their grand mission to save the world from an ancient foe. Sanders had dreamed of magnificent buildings, sword fights and adventures, ancient ruins and glory—not mud, blood, groans of pain, and cold so brutal it made bones brittle.

A crash in the thick forest. Sanders and five of his best guardsmen ran toward the sound, but the snowpack slowed them, and they were too far behind to catch up. The raiders vanished along their secret trails to dugouts and caves, or wherever they went to bend heads together and plot their next attacks.

Sanders and his troops ran back to the clearing and Sanders dropped to his haunches next to the first injured worker. The long shaft of an arrow stuck out from the labourer’s side and blood soaked his shirt. The worker clutched at it, grimacing. A few feet away, a man held a bundled shirt to his head and a second man winced as a tradesman saw to the gash on his leg.

Sanders moved to the downed worker, protecting him, knowing raiders often doubled back after an attack.

“Stay down.” The name of the worker danced on the tip of Sanders’ tongue. He’d seen the black-haired fellow around, recognised his bent nose and scarred cheek. The labourer always slapped others on their backs encouraging them, but for the life of him, he couldn’t remember the man’s name.

Around the logging camp, a dozen workers crouched behind carts and boulders, the whites of their eyes large and stained red from sleepless nights. A nervous horse whinnied and stomped its front hoof on the ground, tossing its head from side to side to free its reins from the cart.

A rustling in the woods sent the workers scattering like dandelion seeds in the wind towards the nearest rock, tree stump, or overturned cart. Sanders swung around, his blade poised to strike, then he relaxed. A squirrel jumped from tree to tree, and with each bounce, a pinecone dropped to the ground.

Sanders lowered his sword, but the muscles between his shoulders remained taut.

“If they’re smart, they’re gone,” Guardsman Aric said. His oval face gave him a kindness that smoothed over the aggressive enthusiasm he had for his job. One moment the man could strike an enemy with such force bones broke, the next he cracked a smile, his chest heaving with laughter.

“We need to make sure. Search the woods,” Sanders said to the five soldiers beside him. He bent down to the injured worker at his feet. The labourer’s eyes wider than Waen moon, his hand trembled around the shaft of the arrow protruding from his side. Steam rose from wound as blood met winter air. Pacome. The worker’s name was Pacome.

“Am I going to die, Lord Sanders?” The edges of Pacome’s words trilled and his eyes glistened.

Blood streamed from between Pacome’s cupped fingers. So much blood.

“Hold still.” Sanders licked his lower lip, unable to bring himself to say the truth.

Pacome needed immediate medical attention from Edda, but the camp was fifteen minutes away, thirty in the ankle-deep snow. Blood continued to bubble from Pacome’s wound and pooled under his body.

The forest air was tinged with blood and sweat. Overturned wagons were righted with grunts and loud crashes.

Sanders pulled off his cloak, bunched it up, and pressed one end of the thick oiled-wool fabric against Pacome’s wound, and then draped the rest over the man’s legs. “Stay awake and take deep breaths.”

Pacome’s bent nose hooked in pain, but he gave Sanders a curt nod.

The wife and two children Pacome mentioned with a broad smile at every opportunity were now a widow and orphans. The thought curdled Sanders’ stomach. “Hold on. Keep pressure on your wound. I’ll get you back to camp.”

“Guardsman Aric. With me,” Sanders said pushing himself up to stand. The wind picked up and raced beneath his shirt, leaving a wake of tingling skin.

“Aye-sir.” Half of Aric’s face was cast in shadow making his nose appear longer, and his eyes darkened with a malice that wasn’t in the man’s nature.

Sanders waved the soldiers along, leading them into the woods, flicking his gaze between the treeline and the ground, for tracks, shreds of clothing, anything. Not one trace of blood. Surely one of the raiders had been struck. One hundred feet into the forest, a thick bed of needles covered a patch of forest floor, masking tracks.

A red-winged hawk cackled and took flight, its flapping wings a sharp clap in the air. The coolness air mixed and fresh pine teased Sanders with the hope that winter would soon be over. His bones ached for warmth. The crunch of the needles beneath him punctuated the melancholic groans of the pines.

“No-sir.” Aric’s voice was loud and crisp, the voice of a soldier whose short tenure in the Negdamian army had drilled into him the need for calm and precision.

Secure. The word was foreign in this place.

Vapour streamed from out of Sanders’ nostrils. He drew in a breath, ignoring the rush of blood in his ears. His grip on his sword eased as he scanned the treeline for hidden archers, but only a charcoal-coloured squirrel the length of his shin looked at him from a branch twenty feet away.

Sanders’ jaw tightened at the prospect of more attacks as the weather improved.

Terrified workers emerged from hiding as Sanders led his soldiers back to the lumber camp. Sanders paused by a nervous horse, pawing at the snow. “It’s all right,” he said, and he reached out to stroke the mare’s neck and whisper words of comfort in her ear.

The horse’s breathing steadied, the panic in her eyes subsided. “Let’s get these men to camp,” Sanders said. He helped Aric and the other guardsmen lift Pacome and the other two workers into the cart.

“Tools are gone again,” Aric said under his breath.

Sanders cursed every god he could think of, even the ones he served. The workers had dropped their tools at the beginning of the attack. Anything that wasn’t nailed down was fair game for the raiders.

If they needed coin so much, and risked life and limb over iron and steel tools, Sanders would offer them employment. He had yelled out the offer several times during attacks and raiders fled. No one ever answered him.

The small procession of workers and guardsmen slogged back to camp.

The collection of tents, shanties, workshops, and a large wooden barracks, as well as Sanders’ shack of a house nestled in the heart of the forest. North of the kingdom of Kalit and east of the kingdom of Retkal, the camp sat remote and isolated, far from prying eyes that might discern Sanders’ real plans.

General Roderick ran out of the barracks, his dark-blue cloak flapping behind him, a platoon of men on his heels. The massive soldier’s hand rested on the hilt of his sword, his gaze on the wounded men being unloaded from the cart behind Sanders. “Erton, Kiyen, Marven. Take squads and patrol the perimeter.”

Roderick’s breath carried the stench of cheap wine, and his baritone voice rolled over the courtyard and the rough-hewn cedar planks of the barracks to the rickety guard tower at the far end. When Roderick barked an order, people all the way in Ravel heard it. If he yelled an order, it bounced off the walls of the Kalitese royal palace in Eotirali and rolled back towards the camp.

A chorus of “Aye-sirs” chimed from his men, and three squads formed, then marched out of the camp and disappeared into the fading light.

The commotion in the courtyard drew a crowd of labourers out of the workshops east of the yard. Curious faces twisted into saddened ones as the workers ran towards their wounded friends. The dozen labourers grumbled insults and spat at the guardsmen jogging past them.

“The incompetence of your men has cost me workers. Again.” Hector Alphon, the master builder, moved to stand in front of Sanders, his finger outstretched and pointing at Roderick.

Hector’s blond queue fell to the base of his neck, and it took all of Sanders’ will to not reach out to grab it and drag the master builder away. If there were any other builder in the world equal to Hector’s talents, Sanders would hire him in an instant. In fact, Sanders would hire any builder with half of Hector’s abilities. Instead, Sanders was stuck with Hector, brilliant and stubborn, determined and inexhaustible, and much-needed.

“My men aren’t incompetent,” Roderick said. The general’s voice rumbled in a bearish growl, and he sucked in air in preparation for a tirade.

Sanders put a hand on Roderick.  “I was there, Hector,” Sanders said. “The attack was fast and over before the guardsmen could respond.”

“I cannot complete the task you set before me if my workers are too terrified to do their jobs.” Hector turned to Roderick. “Your soldiers need to soldier.”

“There are injured that need a boost in morale,” Sanders said, nodding in the direction of the barracks. “See to them.”

Hector lifted his pointy chin and stared at Roderick. His features hardened on his oblong face as if goading Roderick to throw the first strike.

Roderick’s leather armour creaked under the strain of flexed muscles. “Happy to settle it here.” He cracked his knuckles and leaned forward.

“I said see to them,” Sanders said to Hector.

Hector gave Sanders a curt nod, brushed past Roderick and walked towards the front entrance of the barracks.