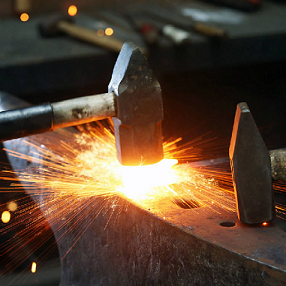 The goddess stood in front of a row of smiths, surrounded by men and women with soot-covered cheeks. Humidity hung in the air, coating everything in a slick layer of grime.

A plaited black queue fell between Samuli’s shoulders. The soot splotches on his face brought out the brightness in his eyes. “Goddess Timea,” Samuli said, removing his linen cap. “Our forges do not burn well.”

A coil of spiked steel churned against the lining of Timea’s stomach. This was not right.

Timea stepped forwards, the cracked ground dusted her boots, and the dozen smiths gathered around her made way. She entered the smithy, a building held up by stone and wood columns and two of the walls opened to the street. The shade provided no relief from the weight of the air. Three stone forges stood in the centre of the workshop with an unfinished sword cooling in a bucket of water. Horseshoes hung on the walls.

She walked to the bucket, removed the sword and inspected it, feeling its weight and balance, then slicing the air with it. “What have you been using, Samuli?” she asked.

“Same as always. Coal from the Elzaz Ridges.”

The smiths lined the edges of the workshop. One dozen worried gazes fell on Timea.

“It has good balance.” She gave the sword a firm shake then turned it to inspect its horizontal edge.

Samuli’s lips parted and revealed a gap-toothed smile. “Used the same technique my father taught me.”

She glanced his way. “Which is?”

The smiths stared at one another. A woman shifted her weight, scuffing the heel of her boot against the ground. Samuli’s lips pressed shut, and he lowered his gaze. A bulbous nosed man with chubby cheeks coughed and smoothed his eyebrow with his finger.

‘The smiths of the Vale of Olps took their secrets to their graves,’ that was the engraving on a brass plaque over each entrance of the town. That was etched into the hearts of the smiths.

She could peer into their minds, learn their secrets. She could offer coal that burned hotter. Instead, she turned her head towards the cold forge and smiled inwardly.

“We’ve been experimenting with different steels,” Samuli said, “but we can’t get the heat high enough to forge them well.”

A tingle caressed Timea’s nape. Slow. Tender. Brushing over the small knot of bone where her shoulders met her neck.

A thrill shot through her and the inward smile became outward. She lifted her gaze from the forge, and to the man leaning against a support beam of the smithy. Her pulse tripped.

Arms folded across his chest, Makar leaned his arm against the beam, his back to the street. His dark eyes fixed on her, the sun reflecting off his closely-shaven head. He shifted his stance, and the bright-grey light of the overclouded sky brought out the angles of his cheeks and the dark circles under his eyes.

Another migraine. It was written in the tight lines around his mouth, the way he couldn’t focus his eyes and shied away from the overcast sky.

Too many prayers, too soon.

She shot him a worried glance, but Makar brushed it off, sending another wave of tingles up the length of her spine.

Soon. Love. Soon. After the work is done. After the people are cared for and content.

Timea returned her gaze to Samuli, who had straightened.

“It has to do with the cupellation process,” Samuli said. “Helps purify the alloys.”

Timea inclined her head at Samuli as he described the need for higher temperatures. She sent Makar a pulse of heat, an invisible burst that landed on his lips and stole a glimpse of him.

Makar’s full lips parted in a languid smile and that told her what he had on his mind.

It had been weeks. Eight painfully long weeks, they’d only stolen kisses but had never been truly alone together.

A second tingle of electricity pulsed at her nape, tracing the length of her neck to the base of her skull, leaving behind a wake of delicious goosebumps.

She cleared her throat and straightened, tiny pulses still teasing her skin. She sent Makar a wave of heat, one that teased the top of his upper leg and swept down his thighs.

Makar’s chest expanded in a long breath. His arms fell to his sides, and he shifted his weight. His eyes widened to the size of Wopen Moon. The spark flared into an inferno.

Soon, love. We’ll be together soon. She already tasted the sweetness of his kiss.

“How’s this?” Timea asked. She waved her hand, and a stack of coal appeared.

A round-faced smith raised her eyebrows. A burly man slapped a tall man on the shoulder as he said he knew it would all work out. Elated voices filled the workshop.

Samuli stepped forwards, placed some coal on the forge, and pressed the billows.

A woman with a dirty cream shirt and a leather apron reached for a pair of tongs and collected an unfinished dagger from a workbench.

Sweat trickled down Timea’s back. Her tunic clung to her in all the places she wanted Makar to touch. Tension bubbled in her stomach as a series of whispers grew to a crescendo. More people calling on her attention. More prayers sent her way. More prayers she couldn’t tend to immediately. A series of panicked shouts calling for more warmth. Another series of yells calling for the fires to start.

Ping. The smith struck her hammer against the piece of steel.

In the time it took for the smith to raise her hammer and strike the sword, Timea answered one hundred prayers.  Prayers for more fire for the hearth, prayers to light the torches without suffocating miners, prayers to ensure homes remained warm during winters storms.

More answered prayers to ensure candlelight to read by, torches to light the streets, fires to cook hardy stews.

A woosh of prayers streamed past her ears, and she reached out and grabbed hold of the most urgent ones. One asked to ensure the boiled waters clean the bandages of the wounded. A second asked for a stronger fire to warm the house against a gale from the Lisnet Sea.

Timea pulled in a long breath, her world tilting left and then right. She corralled her focus and brought it to the present, to the low-burning fires of the smiths in the Vale of Olps.

Again, the smith struck her hammer against the anvil.

Timea took three steps closer to Makar. Closer to his touch. Closer to his warmth. Seven feet separated them. It could have been seven miles or seven leaves or seven galaxies. Her gaze slid from the smith at the forge to Makar and sent another caress over his lips.

Makar’s jaw relaxed and he pressed his eyes shut for a moment.

“This will do,” the smith said. She held the dagger up for inspection. “Thank you, Goddess Timea.” She beamed a smile at Timea that revealed a missing front tooth.

A chorus of thank-you’s filled the smithy.

Gratitude prayers whisked around Timea, blurring the edges of her vision.