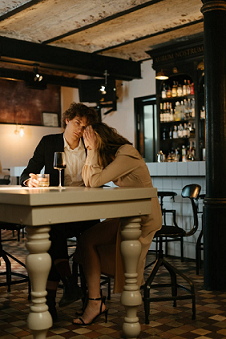 We’ve all heard the phrase ‘conflict drives the plot.’  What does it mean?

We’re writers. Let’s start at the beginning. What is conflict? Conflict is a clash of rights, power, interests, processes and values. It’s something I want but can’t have. It can be violent or non-violent and oscillate between the two. A conflict that started over a difference in interests can shift over time and manifest as a difference in power and rights.

Conflict manifests in several ways, including internal (you have to overcome doubt), interpersonal between a dyad (you had a spat with your spouse), and inter-group conflict (such as gang warfare or war between nations).

How does conflict drive the plot? The main character must address specific problems, constraints, and dilemmas to achieve their goal (in a happy ending) or consistently fail to address these issues and fall further and further behind their objective (a tragedy).

A conflict must be complicated enough to have consequences on the story throughout the book. If a couple argues over what to have for dinner and becomes the book’s central conflict, the reader will disengage. Why? It’s challenging to keep a reader’s attention for 80,000 words when the couple is bickering over the same thing.

However, if the argument over what to have for dinner is symbolic of deeper issues, the author can mine the conflict and find deeper conflicts. For one partner, their internal conflict is shame at having an affair. For the other partner, their internal conflict revolves around forgiving the other person or leaving the relationship. Their interpersonal conflict (dyad) centres around a lack of communication and neglecting their relationship for years. Their group conflict may stem from family and cultural norms to stick to stay married no matter what.

In the above scenario, the couple cannot resolve the superficial issue of dinner until they address their individual conflicts. Why start with the individual? Ever think it’s easier to change the world than it is yourself? It’s like that with conflict. When people are in a high-conflict situation, they use their power (I’ll get into the concept of power in another post) to try to force change onto another. Sometimes they negotiate; most of the time, they use varying non-violent and violent coercive measures to get the other party to change.

When all of your characters’ attention is focused on changing the other, they miss introspection and growth opportunities. Without growth, there is no moment of insight that provokes a change of personal behaviour. Whether you are writing a plot-driven or a character-driven book, there are key moments in the story where the character needs an increase in awareness to resolve the conflict. Let’s take the movie Ender’s Game. A team of soldiers train to participate in a military campaign. The main character risks everything on an end-all strategy and wins. However, the main character has a moment of insight after his military win, which shatters his view of the war. The main character uses knowledge and drastically alters his behaviour.

If your characters are entirely focused on changing the other, they risk disempowerment. Why? They are not taking action to create the future they want to see and are not making the most out of whatever resources and opportunities they must shape their futures. For characters to be active, they need to make choices, execute the decisions, and address the consequences. When characters wait for others to change, they risk being pouty and whiny. A character can stomp their feet and stick out their lower lip for one scene, perhaps two, but no one wants to read about a petulant main character for the entire book. Adult characters shouldn’t throw temper tantrums because they didn’t get the soup of their choice. You get to use pouting or a temper tantrum once to demonstrate deeper problems, but you must move on to keep the story interesting.

There’s a dynamic interplay between internal conflict and the conflict dyad. Let’s explore this dyad a little more. MC 1 wants MC2 to do the dishes. MC2 refuses to do so, saying they have worked all day and are tired. MC1 has a choice to escalate the conflict and drudge up all of the past wrongs, and they do, and the conflict escalates into a shouting match and MC2 heading over to their friend’s house for the night.

It’s two days later, and MC2 returns home. MC1 needs to use the car tomorrow because they have doctor appointments. MC2 objects because they have to travel to a rural area for their job, and they don’t want to drive across town at 07h30 to drop them off at their appointment early, then drive two hours in the opposite direction. The argument escalates. MC1 says MC2 was willing to find alternatives at the beginning of their relationship and slams the door to the bedroom. MC2 sits on the sofa and contemplates and recalls times when they were more accommodating and willing to find mutually agreeable solutions. Does it change MC2’s actions right away? No. It does spark a realisation in MC2 by comparing and contrasting who they were to who they are right now. The writer introduces more and more of these opportunities for reflection until the character is in the headspace to address the interpersonal or group conflict.

Ah, but you write plot-driven books. It’s the same dyad between interpersonal and group conflicts. When you are at war, there’s a learning curve. You need to understand your foe’s military strategy, their command structure, their objectives. Insight, in this case, comes from understanding what motivates them.

Information needs to be shaken loose for different decisions to be made. Moreover, the MC’s information must be internalised, and the MC must change their behaviour to achieve their goal.

Here’s an exercise for you:

If you are interested in learning more about conflict and plots, reach out to me through my contact form with ‘conflict webinar’ in the text. I’ll be putting together a series of webinars.

Feel free to reach out to me on Twitter to let me know how you fared with the exercise.